1987 (Ys I, Metal Gear, Maniac Mansion and Pirates! are released) 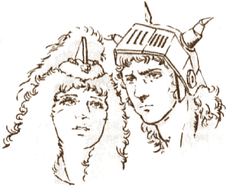 Knightmare II: Maze of Galious/Majou Densetsu II: Daimashikyou Galious (MSX/NES, 1987)
Subgenre: ARPG-ish (shops, some NPCs, basic character building - beat bosses to upgrade your health bar), Zelda-like without an overworld
​Other: Hub area, Various differences between the versions (the info below is for the MSX one), Exp point mechanic however filling up the bar only restores your health
​ ​
Playthrough (MSX)/Playthrough (NES) - Video Retrospective - Mini Review (MSX) 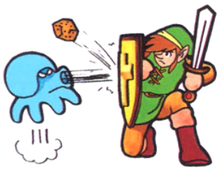 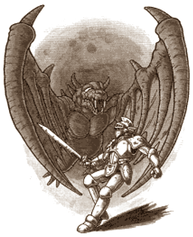 Dragon Slayer IV: Drasle Family/Legacy of the Wizard (NES/MSX, 1987)
Subgenre: Puzzle Platformer/ARPG-ish (no exp point leveling system, shops and inns in the dungeon), Similar to Milon's Secret Castle
Movement Mechanics: Flight (wings item - actually works more like being able walk/climb in mid-air and drains MP while used), Can stand on enemies, High jump
​Other: Some layout differences between the versions, The room with a large dragon painting is a hub connecting to four sub areas designed with one of the playable chars in mind
​
Playthrough - Video Review - Mini Review 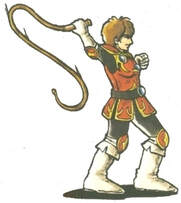 Castlevania II: Simon's Quest/Castlevania 2 (FDS, 1987/NES, 1988)
​Subgenre: ARPG-ish (no stats shown but you gain some health+endurance with each level - you can level up once in-between each castle so six times in total, shops - can buy weapon upgrades)/Zelda-like Platform Adventure
​
​Playthrough - Video Review - Mini Review
​ 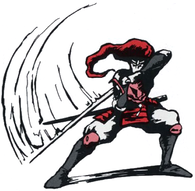 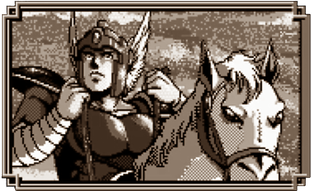 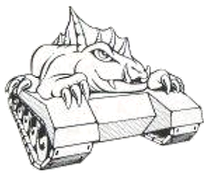 
Dizzy: The Ultimate Cartoon Adventure (Multi, 1987) - WIP
​Subgenre: Puzzle Platformer/Maze Platformer
Inventory puzzles
No permanent abilities or tools gained?
No save or password save?
No map?

Sorcerian (PCs, 1987/MD, 1990)? - WIP
​Subgenre: ARPG (Create and control a party of four all at the same time - rest of party follows the leader in a line)
Other: Town and dungeons split
​Flexible non-linear structure (can technically exit every quest by returning to the entrance, can play scenarios over and over to get more loot, can select any quest in the game at any time with the exception of the final one)
Sometimes you're limited to 3 chars for a certain quest
Minor puzzles (hidden switches for example)
Save feature
No maps?
No ability gating?
​
Let's Play (PC DOS) - Video Review


Black Magic (C64/AII, 1987) - WIP
Subgenre: ARPG (basic leveling system (killing enemies and rescuing people gives exp, gain spells when leveling up and some are needed to progress), NPCs that trade food for one of two randomly picked things: temporarily unlimited arrows or scrolls), Collectathon-lite (6 eyes that you should get in a certain order to unlock a castle - picking up an eye makes the game harder)/Rescue mission
Spell inventory (ammo-based; Blink - short randomized teleport, Chill - freeze water and some enemies, Vanish - don't take damage from enemies, Bolt - destroy some walls, Heal, etc.)
Platforming puzzles
Randomized item locations and abundance (leads to tight resource management and you can get stuck)
Comes with a detailed map
No save or password save
Hunger mechanic
Named areas (signposts)

​
Codename: Droid - Stryker's Run Part 2 (BBC Micro 1987)?
Subgenre: Collectathon-lite (collect 4 items to pilot the ship which is the goal of the game)
No permanent tools/abilities gained that let you reach new areas?
Micro-maps
Flying chair vehicles
Elevators
Minor switch puzzles
Mines
No save or password save? 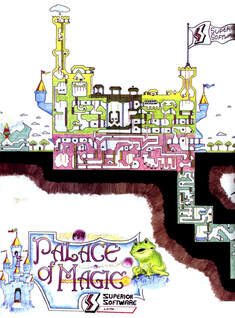 Palace of Magic (BBC Micro, 1987)
Subgenre: Maze Platformer/Collectathon?, Similar to Citadel
No save or password save?
No map?


Thunderstruck II (BBC Micro, 1987)
​Subgenre: Maze Platformer/Puzzle Platformer
More of the same?
Named rooms
No save or password save?
No map?

​
Esper Boukentai (NES, 1987)
Subgenre: ARPG (can talk to both NPCs and enemies, shops, basic leveling system)/Metroid-like
Movement Mechanics: Moon jumps (can jump more than two whole screens upward from the get go and even higher as you level up) and hover jumps (by repeatedly attacking in mid-air)
Other: Level- and key item gating (open doors by hitting switches while at the right level or carrying the right item)
Basic map feature (not that useful)
​5 playable chars that you can switch between on the fly after rescuing them (mainly stat differences; Genta can break certain walls and floors, only Naoyuki can reach the treasure chest in the Cylindroom due to having a higher max jump height)
Password save
Some resource management (finite money, lose 2/3 when you die)


Jikuu Yuuden: Debias/Debias: Legendary Space-Time Hero (NES)(fan translated)
Subgenre: ARPG/​Proto-PA (no ability gating besides "language power" which lets you understand certain NPCs)
Perspective: Some TP view segments
Password save (fairly long)
Layered world (see Goonies II for example)
No in-game maps?
Day/night cycle with some gameplay effects
Can warp back to town via Aaron (a spirit guide who you can also consult - can ask him more questions if your Tech stat is higher)
Two different endings (Yes/No question before the end)
Two doors randomly lead to one of two rooms with one being a dead end


Spelunker II: Yuushahe no Chousen (NES, 1987)
Subgenre: ARPG, Proto PA-ish (level-based - three big maze-like levels with layouts similar to CV2, items/abilities carry over?)
Layered world (see Goonies II)
No map
​No save or password save (and no checkpoints or continues either)
Three endings (depends on your Holy level which is a basic karma/moral system)
Some fall damage
Basic puzzles (find hints for by exploring and looting the dead)
No ability gating?
​
Playthrough - Review


Werewolves of London (PCs, 1987)
Subgenre: Killathon (the more you kill the more the police will make an effort to stop you)
​Perspective: Tilted view
Other: Not much platforming
Day/night cycle (transform into a werewolf at night allowing you to kill certain NPCs to lift the curse as well as jump higher and longer to reach new areas)
Basic radar system (flashing cross in the GUI) but no in-game maps
Flashlight item for dark areas (limited item inventory)
No save or password save 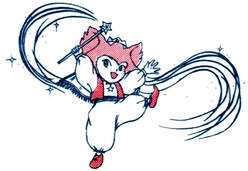 Outliers:
​The Magic of Scheherazade (NES) - TD View ARPG/JRPG hybrid w/ some sidescrolling segments and Platforming
Mostly linear structure (some freedom in when to tackle what within each area)
Password save (pretty long)
Basic dungeon maps (no overworld maps)


Zombie Hunter (NES, 1987/MSX, 1988) - ARPG/Proto-Platform Adventure (exp point leveling, shops), Level-based w/ some branching paths (similar to Castlevania 3 but with locked doors at the end of levels, different paths have the same layout but different enemies)
No save or password save
No maps
No ability gating besides candles to see in the dark
Can escape from boss fights if you have a bag item
Weapon deterioration
Shows enemy health and names if you have a candle
Limited item inventory (10)
Some randomized loot
Second quest via a simple code


Saboteur II: Avenging Angel (C64 etc, 1987) - Mission-based (can choose the order to do them in, retrieve object and escape from the second one onwards (sometimes need to disable an electrified fence) - need to collect part of a code in each mission besides the first to stop the missile launch and fully beat the game)
No new abilities gained and the world (while the layout is the same) isn't persistent between missions
Weapons are one use only and don't carry over between missions
​Time limit (between 600 and 999 seconds)
Basic map on the loading screens (Spectrum only?) and in some manuals
Password save (one per beaten level)
Elevators
Regenerating health when standing still
No difficulty options here?
​
Playthrough - Reviews


Woody Poco/Woody Poko (FM-7/PC-88/NES, 1987) - Maze Platformer w/ ARPG/Action Adventure elements (Level-based), Tilted View (see Double Dragon)
Password save
Some innovative mechanics (gamble, bribe other characters, can steal items from stores but Poco's appearance will be altered in the process and shops will stop doing business with him), hunger mechanic, shops are only open at certain times of the day - sleeping at inns makes time fast forward, seasons change in accordance with the in-game clock, the use of an item sometimes changes depending on which hand you hold it in)
Many optional tunnels?
Can lower the difficulty... by choosing to play as a girl character at the beginning of the adventure
Dark rooms (Zelda II?) and lanterns
Can perform long hover jumps using an umbrella (several screens on NES)

Playthrough (NES) - Review
​
​
Shiryou Sensen: War of the Dead (MSX, 1987/PC-88/PCE, 1989) - ARPG/Survival Horror w/ escapeable encounters (similar to Zelda II except they don't pop up near you and disappear after a few seconds here), TD View Hybrid (exploration)
Mostly linear
A bit different and simplified on PCE & PC-88
Save feature (password save on PCE - can only get one at the cross in the church)
No area maps (seems the manual came with a world map)


Driller/Space Station Oblivion (Spectrum/C64/CPC, 1987/AMI/ST/PC, 1988) - 3D FPS/Maze Shooter, Vehicle-based, No jumping (can raise and lower the body of the vehicle as well as look up/down), Hover vehicle lets you fly over pits, P&C aiming
No other ability gating besides the hover vehicle
​Basic switch and code puzzles (can also empty a pool of water at one point),
Compass
​
Playthrough

​
Mega Man (NES, 1987) - Level select screen, Replay beaten levels (to get the platform creation item, no e-tanks or tools like the balloon here)
Gain abilities from bosses that are useful (but not required) against other bosses
​​Password save

​
Shadow Land/Yokai Dochuki (ARC/NES, 1987) - Action Platformer w/ Adventure/RPG elements (fairly open ended levels, gambling and shopping, various upgrades)
Weapon upgrades (rate of fire and strength) and movement upgrades (faster movement and longer jumps, faster swimming),
Some hidden areas
Interesting map feature (shows a nice bird's eye view of the entire area but no topographic specifics)
A "food" item lets you regain 6 HP at death (similar to fairies in Zelda 3)
Five different endings (not a big difference but still - your behaviour in the game determines if you'll end up in heaven or hell or somewhere "in-between", the less points (not shown until the end?) you get in the final level the better and you mustn't collect or kill anything in lvl 5 to go to heaven)
One sequence break possible (lvl 4 tree part?)
Password save (PC Engine)

​
The Last Ninja (PCs, 1987) - Isometric Action Adventure, Jumping, Can block attacks, Level-based (and you don't backtrack to previous ones)
-Search move
-Weak/fast and strong/slow melee attacks
-High and low attacks (can also crouch)
-Shows enemy health bars
​-Adjustable player and enemy speed (can be used to your advantage in some situations)
-Weapon and item inventories
-Minor ability/tool gating (claw to climb cliffs and rope to climb at another spot)
-No character upgrades besides the glove
-Can save on PC and Amiga (Remix version), Lives system
-No maps


​No platforming:
​Death Wish III (C64/Spectrum/Amstrad/MSX, 1987) - Maze Shooter (track down riot/gang leaders and kill them), Tilted view (but the gameplay is side view)
No jumping
Mini-map and compass features
Sniping through windows inside buildings (FP view)
No ending and no difficulty progression?


Sinbad and the Throne of the Falcon (PCs, 1987) - Graphic Adventure/TBS w/ some Side View & FP View Action segments (climbing and duels/stormy boat ride through cliffs where you rescue crew who fell overboard), Interactive dialogue, Hub map w/ 2 levels of zoom 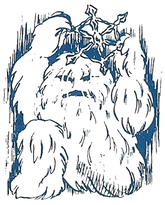